Saying ‘Yes’ to Adventure: From Hospitality to Mining

Even as a young woman, Angela Vanstone had an adventurous spirit and a curiosity about people. What she didn’t expect was that this was a great match for a leadership role in the mining industry.

Angela grew up on a farm in New South Wales and as soon as she graduated Year 12 in 1992, she took off to see what adventures Australia had to offer. Her early roles in the hospitality industry offered an opportunity to pursue this adventurous spirit and meet a diverse range of people.

Angela met her husband, Michael, on the Gold Coast in 1996. They soon returned to Western Australia where they owned and operated a hotel in Fremantle and later, moved back to South East Queensland to open a restaurant on the Sunshine Coast.

Ten years later, Angela was driven to explore a new career. She enrolled in a Bachelor of Science, Environment and Health. A chance meeting with the General Manager of the Cracow mining site would set Angela on a new path. 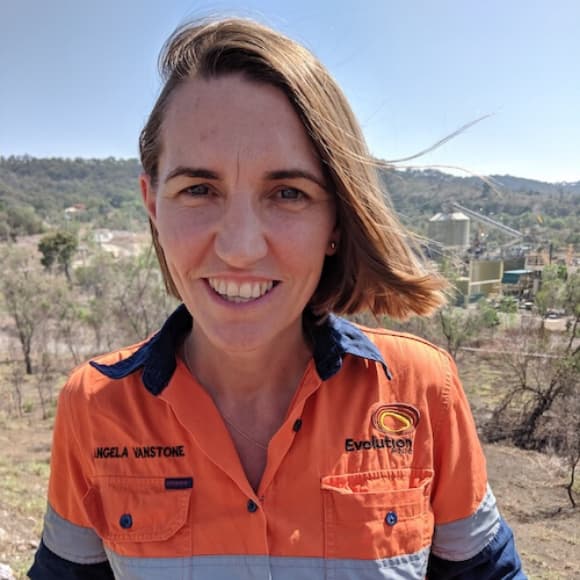 “I happened to meet the General Manager of the Cracow mine site (acquired by Evolution Mining in 2011) at the local bowls club. We got talking and he suggested I apply for work at the mine. The opportunity was too good to pass up,” she shares.

Angela started as a Safety Compliance Officer which saw get stuck into training, safety, health and emergency response. After 12 months, she was eager to work outdoors and when the opportunity presented itself, she jumped across to the environmental team. It wasn’t long before she was promoted to Senior Environmental Advisor.

“It was incredible to be promoted to a senior level within four years in the industry – this pace of progression is rare in the industry. I believe it was my life experience before mining which propelled me toward leadership.”

With a blossoming career, Angela and Michael still found time to welcome two beautiful children into the world; their son Jack in 1999 and daughter Cleo in 2002.

From 2012 to 2017, Angela and Michael were stationed at the Pajingo Mine Operation in Queensland while based in Charters Towers, North Queensland.

“We were so fortunate to have the opportunity to live and work in such an energetic community,” Angela reflects.

With the sale of Pajingo, Angela transferred to the Kalgoorlie operation for six months as a Fly In Fly Out (FIFO) employee. However, longing to be closer to home, she accepted a role with another mining company in Brisbane, before returning to Evolution Mining one year later.

“By the time my contract with Evolution mining was coming to an end in 2017, my family and I had just moved to Brisbane. It was important for me to be closer to my daughter as she had just started at a new school. I accepted an offer with another mining company as their Sustainability Manager. After a short time, I was eager to return to Evolution. My values align with Evolution and we have a shared understanding of high-quality work. I also missed the community and the value placed on networking; we really care about one another’s professional development at Evolution.”

Angela went on to undertake a series of secondments at Evolution Mining, with a home base of Brisbane and travelling to Mount Carlton and Mount Rawdon Operations on a family-friendly roster.

Today, as Group Manager of Environment and Sustainability, Angela is responsible for governance, assurance and implementation of sustainable initiatives.

With her children now young adults, Angela is still nurturing her adventurous spirit. She is constantly travelling across Australia visiting each Evolution site quarterly. She is looking forward to adding Canada to her travel itinerary as Evolution has expanded internationally.

“It’s a different way to live - I wake up and I need to quickly adjust and work out where I am. It’s an exciting lifestyle. My family and I get itchy feet quickly, we embrace change - after a few years in one region, we’re ready to explore new places.”

Valuing and Leveraging your diverse skillset

Hospitality to mining is not a typical career move, but as Angela discovered, there is a world of opportunity in the mining sector. Here, she offers some words to anyone looking to begin a second career in the mining.

“I was in my 30s when I started in mining. To succeed, it’s important to have the mindset that your role isn’t a ‘job’ but it’s a new career path. Being of a mature age is an advantage, as we have a broad range of life experience. Leaning on my life experience and passion for learning and adding value has made all the difference in my ability to succeed at work and in my personal life.”

“When I completed university, I thought, ‘Great! I don’t need to study anymore!’ But in reality, we must continue to learn and maintain skills. I have obtained numerous qualifications in behaviour and technical areas while in mining. Although it may seem tricky to balance work with training, your commitment in the early days will pay off because you’ll need a broad range of skills, knowledge and exposures to progress to a leadership role or to specialise.”

“Build your lifestyle around your career. My family has found it incredibly enriching to live in the community where we worked, rather than working on a FIFO basis. Once you move to a regional area, you can be surprised by the huge range of activities and a strong sense of community - something you don’t often get in the city. When we lived in Cracow (a town of 30 people), we spent our weekends camping, supporting local events and sporting clubs and driving to the beach. Every region has something to offer.”

When looking ahead, Angela says the unique lifestyle of her children has shaped who they are today. “Cleo plans to study engineering after Year 12 and Jack is seeking employment in mining. Jack and Cleo are attracted to mining as they know there are opportunities on offer which will allow them to grow personally and professionally. Mining offers a unique lifestyle - you need agility, resilience and a sense of adventure, and if that’s for you, you’ll never look back. The mining community has a strong and supportive spirit. With the right company, such as Evolution Mining, the industry has so much to offer.”