Got it
corporate to construction

Vanessa Walding’s dinner party conversations usually feature a moment of surprise. Indeed, her response to the classic “So, what do you do?” question meets with disbelief every time.

“It’s kind of a double hit. Firstly, they don’t understand what it is - because not many people know these roles exist. Then, when I explain it to them, they can’t believe I’d do that job.”

So what does she do? Well, Vanessa describes herself as a “concrete chef, managing how much water and additives are going into the cake”. Broken down, her role as Production Supervisor sees her batching concrete using multiple computer systems, allocating and assigning loads to drivers, dealing with customer and supplier enquiries, and doing yard work duties, including driving a front end loader. “And once I’m done”, she says, “I head home for a glass of Yarra Valley Pinot Noir”.

That clear line between work and home is one of the reasons Vanessa loves her job. Having worked predominantly in the corporate world of IT since leaving school, she loves the fact that you don’t take work home.

“It’s hard work. We’re busy and we all get stuck in. But here, you actually have an end to the day. Home means home.”

As our conversation progresses, however, it becomes clear that Vanessa didn’t choose her current industry for the work / life separation. In fact, she has always had an interest in construction. When she was young she wanted to follow in her Dad’s footsteps and be a carpenter (“but back then girls weren’t allowed to”). As it was, she ended up pursuing a range of corporate roles, and became a Project Manager at IBM. However, when she hit a crossroads in her career, she instinctively knew the path she needed to take. 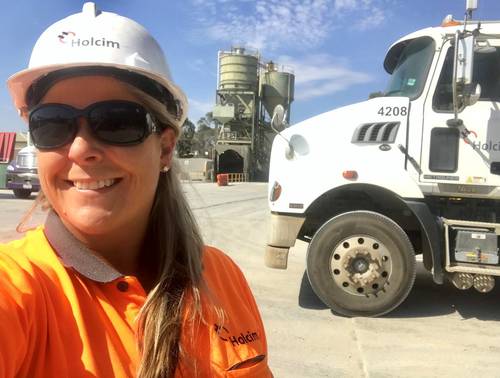 “I’ve always been interested in construction, so I left my role and did a Certificate 4 in Building and Construction. I funded my studies by doing tour guiding on the side. It was hard work but it paid off, eventually.”

Why ‘eventually’? Well, it took two years for Vanessa to get her foot in the door with an employer. She applied for many roles but was only invited to one interview. Then her course trainer contacted her about a role at Holcim, who gave her the break she needed. Nearly two years on, Vanessa says she’s “100% happy”!

“This is where I wanted to be. I Iove the physical environment and while it can be hard work, I like being paid to exercise! I’ve had the opportunity to work in various concrete yards across Melbourne, so I have the skills and experience to jump in and supervise outside of my home yard. There’s also a lot of interaction with different people, which I really enjoy”.

On occasion, not everyone interacts with Vanessa as she might like. She still encounters some visiting contractors, for example, who “see me first, then see a male colleague, and go and talk to him instead”. Vanessa addresses this head-on.

“I’ll say with a smirk, ‘excuse me, you can talk to me. I’m not the secretary.’ That impacts on them. Most start to change. I’m a strong character, always friendly but firm. You need to be.”

So how about her employer? Where does she rate Holcim on diversity and inclusion?

“Other companies say they are diverse. I’ve never seen it; not for jobs like I do. Holcim 100% is, in its approach. Women are still the minority here but we want to change that. Management don’t treat you any differently and I feel comfortable here. I’m very process-driven; it drives a lot of the guys up the wall but I think it adds value to what we do.”

Vanessa’s advice to other women considering working on construction is typically forthright.

“Take an interest in the industry, get on the computer and put yourself forward. Remember, you’re sussing them out as much as they are you. Personally, I’m so pleased I made the move. I switched stilettoes for steel caps and now, I’ll never go back.”

Holcim is a WORK180 Endorsed Employer for Women. Did you know Holcim offers superannuation contributions to all staff on unpaid parental leave (up to 52 weeks!) and a return to work bonus equal to 4 weeks pay? These are just some examples of their commitment to create a better workplace, find out more on their employer page.