A Global Champion with Dreams for the Future

From a childhood tinkering with cars on a farm in the country, Natasha Smith became the first woman in the world to be crowned Technician Champion in Toyota's National Skills competition last year.

She says diagnostics work is the perfect mix of her love for cars and problem solving, and with no two days in a workshop the same, Natasha is excited about what’s to come in her career at Toyota. 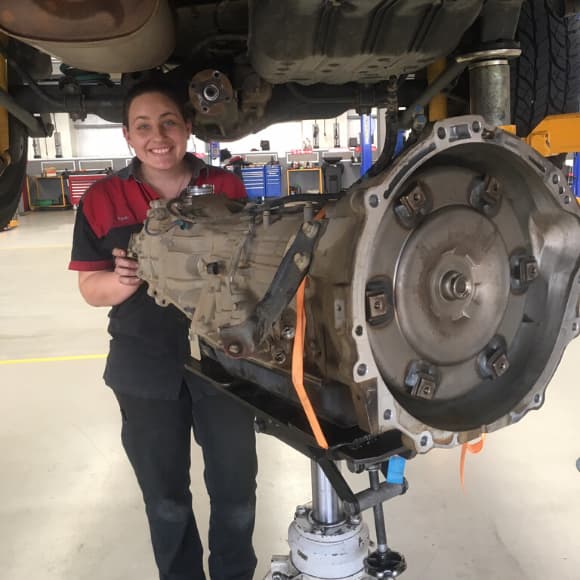 In non-traditional industries it can be hard being ‘the first woman’, but the women who take that role help pave the way for those following behind them. Natasha isn’t the first woman to work as an apprentice, but over 35 years, across 90 countries and regions globally she IS the first woman to win the National Skills competition Technical Champion award. On her way to National Technical Champion, she was also Apprentice Regional finalist for two years in a row, showcasing her knowledge across a range of challenges.

This high-profile win helps show other women what’s possible (we all know the adage that we can’t be what we can’t see) as well as confirming that women really can compete in spaces we don’t normally dominate!

Knowing that workshop technicians and apprentices are mainly men, we asked Natasha what her experience of being one of few women in the workshop has been. She said the other woman in her dealership has been supportive and emphasised that the guys have been really friendly and willing to help.

“The hardest part was the older generation as they aren’t used to women being in the workshop. I had to gain respect and earn their trust, but once you’ve got that it’s easy.”

Natasha said she came in open to learning and not pretending she knew everything, which meant people were willing to help. “They’re more than happy to teach you if you don’t know anything, but if you claim to know something and do it wrong, they don’t like that.”

Her hard work paid off, and now she’s got her sights set on becoming a Diagnostics Technician so she can focus on complex problem-solving.

Toyota runs their apprentice program through TAFE, where students work on Toyota cars and learn from teachers with a Toyota background. Natasha says the group stuck together for the program and everyone was smart and helpful.

No two days are the same in a car dealership, and a typical day in the first year of an apprenticeship may involve learning your way around your workshop, cleaning, building rapport with your colleagues and “gaining respect for the place you work”. Building working relationships early on is crucial, as colleagues teach and help each other out regularly.

By the final year of an apprenticeship a typical day might involve doing services, basic diagnosis of issues with cars, pulling out gear boxes; it’s your most hands-on year with a lot of variety.

“I always liked the big jobs, things like pulling out gearboxes, working on auto transmissions, and rebuilding manual transmissions.”

Natasha says, “I was really lucky, doing major services and starting off diagnostic work as an apprentice. Now I do more advanced stuff that you need to build the skill for over time. Experience makes it easier to do those jobs.”

Getting Through the Tough Days

The culture at Toyota is very respectful and Natasha has become friends with many of the people who trained her. She does say though;

It’s not easy – you have to have thick skin to get through. There are things that will push you to your limit but if you keep going it’s rewarding in the end. There were days I wanted to quit, but from coming in knowing barely anything to what I know now, it’s worth it.

I asked what has pushed her to her limit, and she said she’s felt frustrated at times when she’s been working on a problem for a while and someone more experienced has reminded her of something ‘simple’ to check, only to discover she missed it. But Natasha says;

“I try not to get mad; you learn from your mistakes. You’ve got to take that negative and get the positive out of it. Next time I’ll remember that bad day and know that at least I can check the thing that went wrong last time.”

She loves the challenge and that every car is different. Natasha estimates 80% of the day is problem-solving and multi-tasking, so you’re always learning new things on the fly and the workplace is agile and exciting. 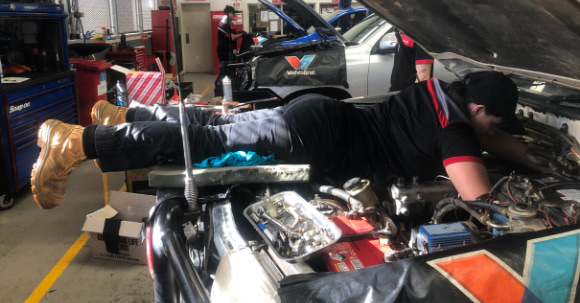 Because Natasha has such a strong ethic around achieving goals she sets herself, having a plan helps her succeed at work.

“I want to continue my diagnostics studies and go on to compete in Toyota’s National Skills Program as a Diagnostics Tech.”

The competitions put technical knowledge and skills to the test across a range of challenges, including knowledge of the repair manual, written quizzes and real-world scenarios such as building brake components or adjusting manual transmissions. They build confidence and skills in employees and highlight people who that want to progress within the company.

“I love what I’m doing now, but if an opportunity came along to step up and take on leadership role, I’d do that too.”

“It’s been amazing. Toyota are proud of their employees and go the extra mile to make sure we’re happy and safe, and coming to work to achieve.”